We have a new word puzzle game called CROSSOVER that you can play in your web browser: 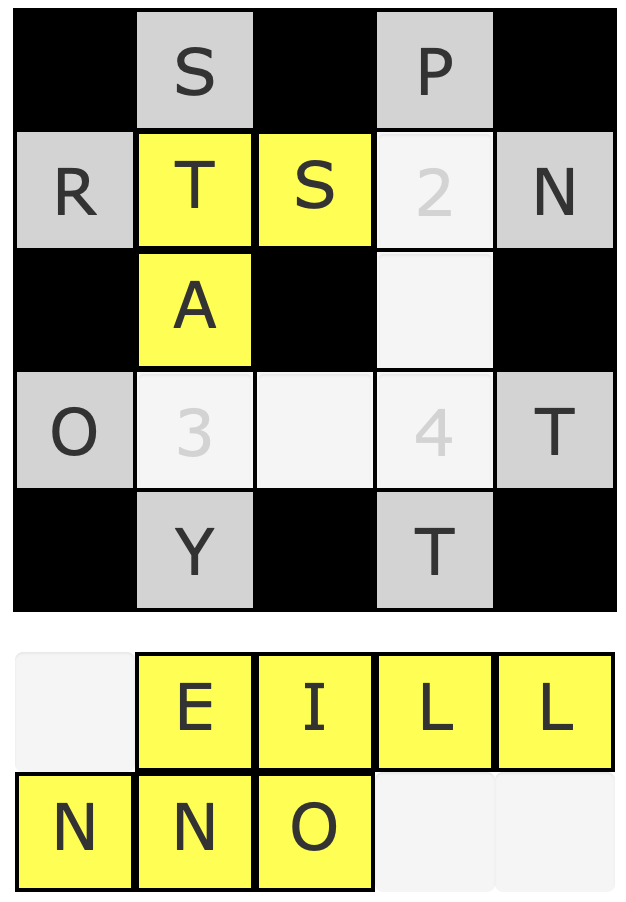 In this example, the word STARTS has been spelled in the first position.

You’ve always wondered how it would be to be the guesser in a game of “Hangman” where the person who’s supposed to think of the secret word instead keeps a list of all the words that are consistent with your guesses, so far, and switches between them when you force the issue. That’s called “Evil Hangman,” and we’ve put up a implementation of it that you can play here, now, as the guesser: http://labs.counterwave.com/evilhangman/

In the following example, the letters A, E, I, O, U, N, and G have been guessed and all occurrences of those letters have been revealed. We are told that there are 62 possible words in the computer’s dictionary that match these clues. The asterisks indicate that the computer has switched words four times.

We added 50 more puzzles to LOOPBACK, playable in your web browser!

Complete the spelling of four 8-letter “looping words” by dragging yellow letter tiles into the puzzle grid. Each looping word wraps completely around one of the four numbered black center cells. It’s up to you to determine where each of the four words begins and ends, and whether it reads clockwise or counterclockwise. 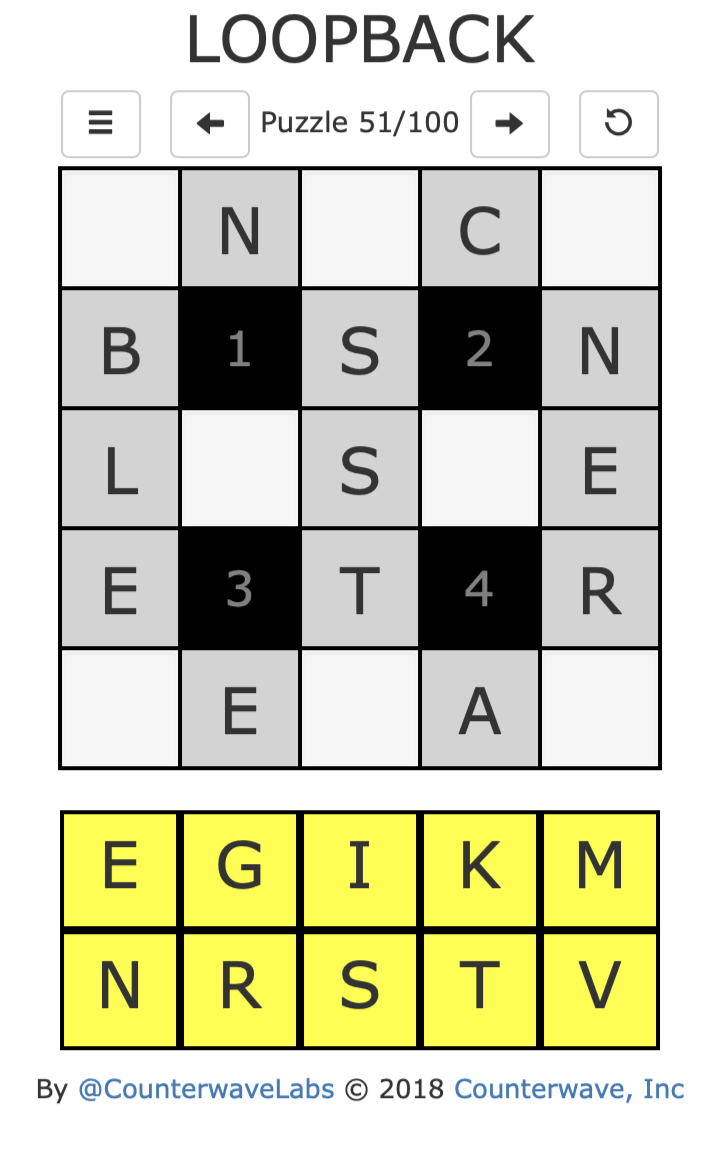 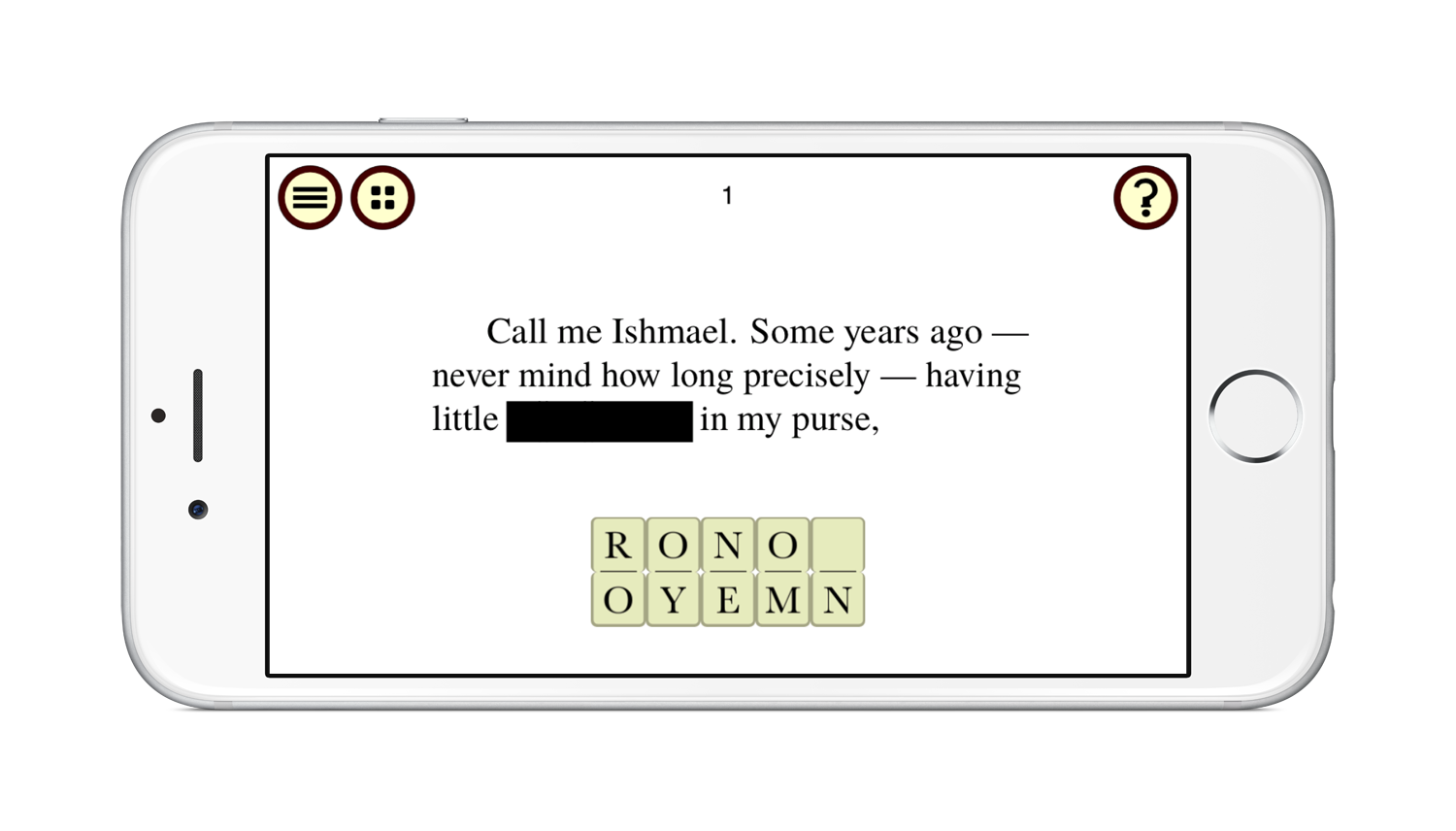 OMBY, the Moby-Dick unscrambling game, is now free! Get it here http://www.counterwavegames.com/omby.

Have you tried our looping word puzzle LOOPBACK? How about our scrambled Moby-Dick puzzle OMBY? Do you enjoy those puzzles, but wish you could put down your phone or tablet and solve them with pen and paper?

If so, then you might enjoy printing and solving this LOOPBACK Moby-Dick puzzle from a limited edition printed book that we put together!

The puzzle consists of a partially-filled grid of sixteen looping eight-letter words, each taken from a sentence in Moby-Dick. The missing word from each sentence will wrap completely around the corresponding numbered black center cell in the grid. It is up to you to determine where the word begins and ends, and also whether it reads clockwise or counterclockwise about its black center cell.

In this example, you can see that the missing (admittedly contrived) word is MOBYDICK, which fits clockwise around black center cell number 5. 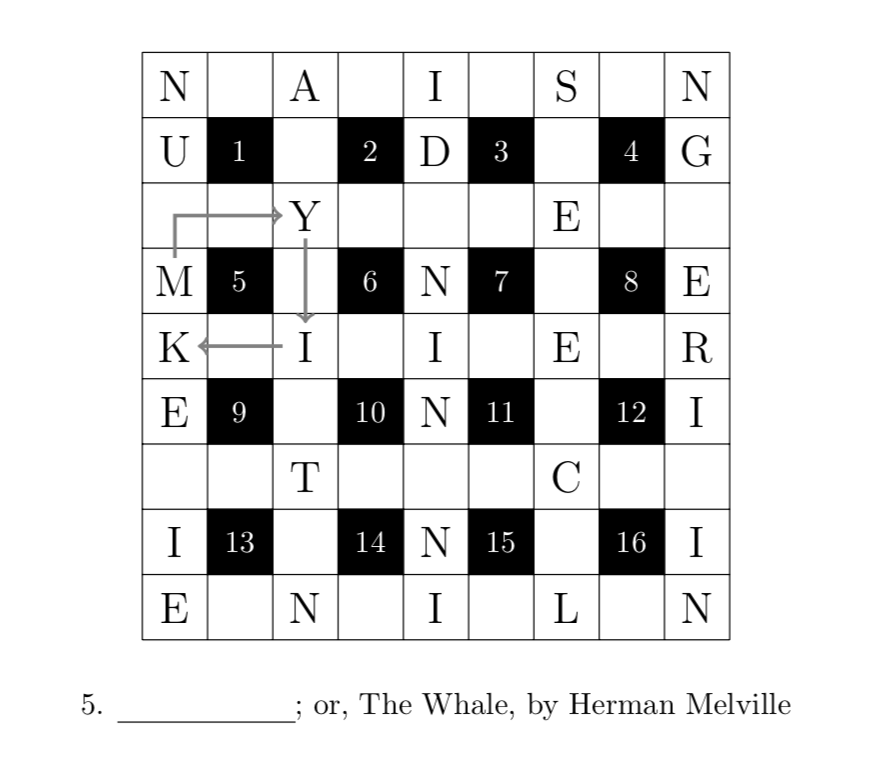 Learn more about the book here. If there’s enough interest we might produce more and put them up for sale.

We’re excited to share LOOPBACK, a new word puzzle game that we’ve been working on: 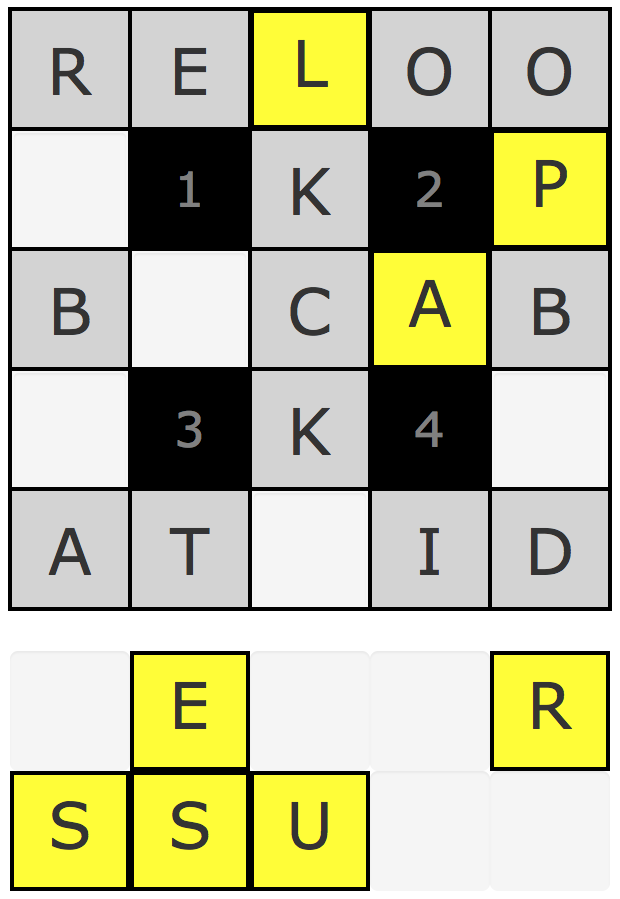 The idea is to complete the spelling of four 8-letter “looping words” by dragging yellow letter tiles into the empty white cells in the puzzle grid. Each looping word will wrap completely around one of the four numbered black center cells. It is up to you to determine where each of the four words begins and ends, and also whether it reads clockwise or counterclockwise about its black center cell.

In this example, the word LOOPBACK has been spelled clockwise around the second position.

Answer words are all common English words and include some proper names. 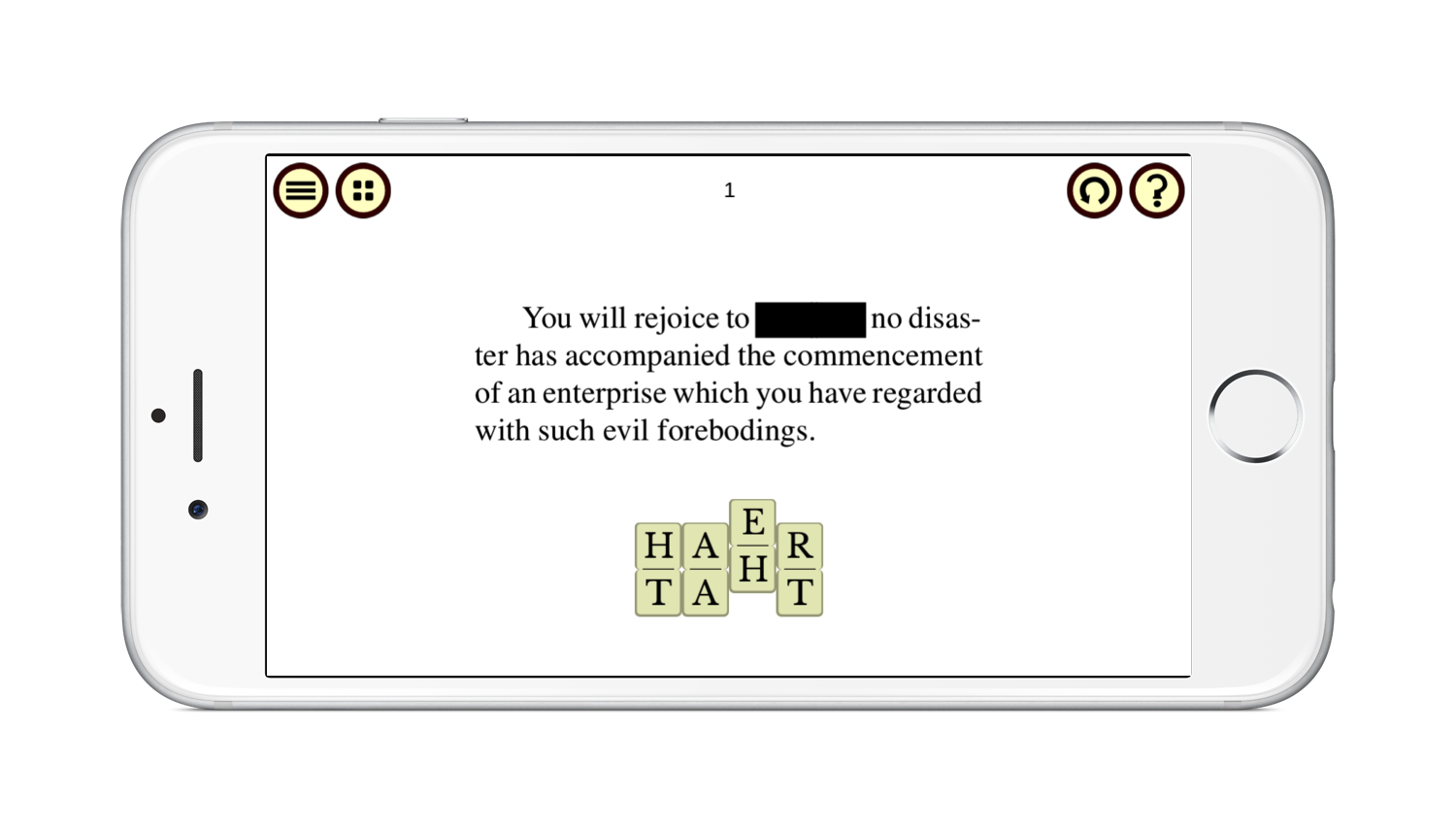 Mary Shelley’s Frankenstein is 200 years old this year, and we’re celebrating by adding it to OKBOS in a free update: available now on iOS and Android!

The idea to OKBOS-ify Frankenstein for its bicentennial came from the students planning Frankenstein Bicentential Celebration 2018, and we were happy to oblige. 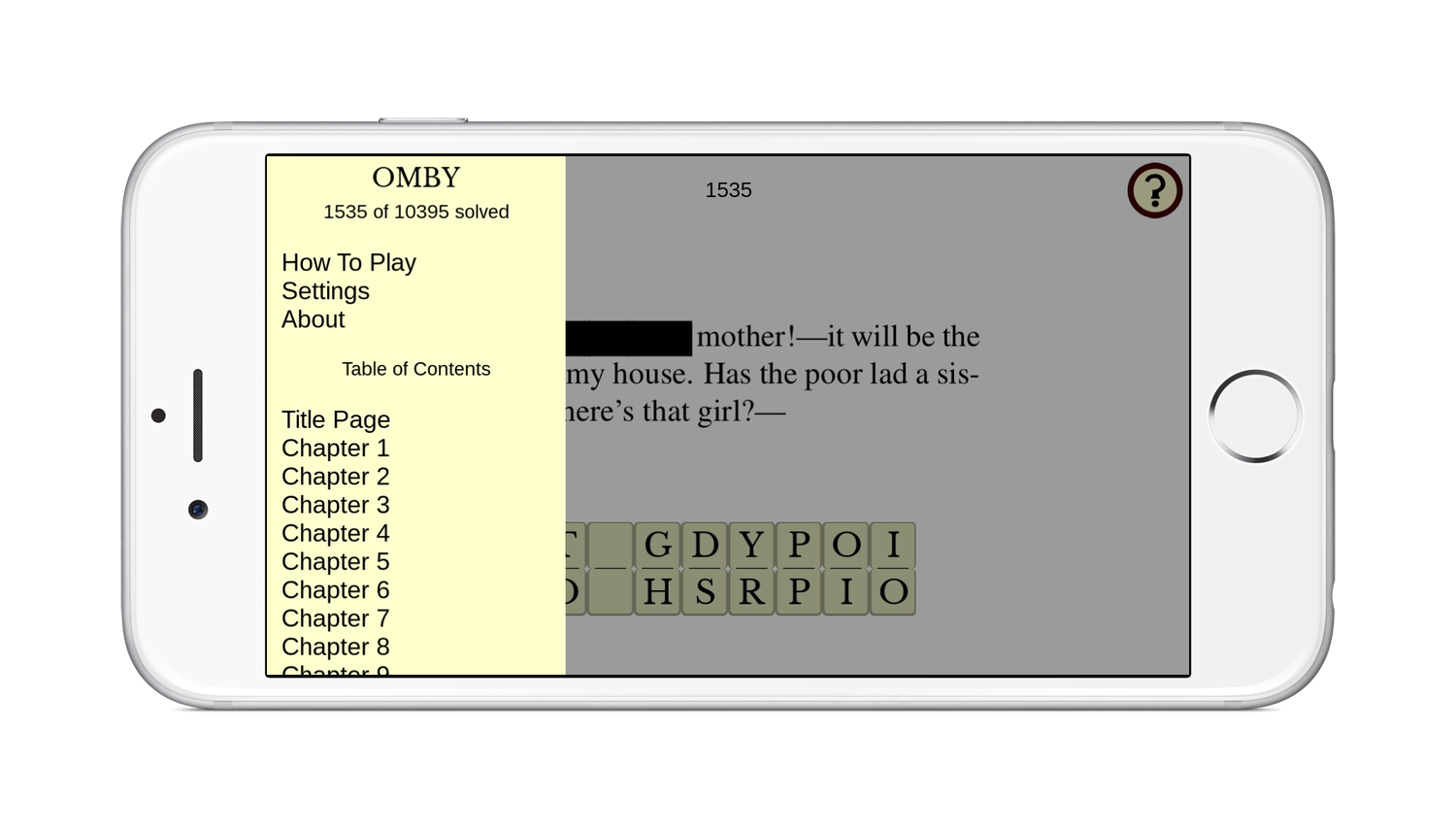 OMBY has been updated with the chapter navigation improvements that we introduced in OKBOS and IBBLE, and all of the apps have been updated for iOS 11.

How far have you gotten in OMBY? Tweet us your progress @counterwavelabs

How well do you know your Watergate history? We scrambled the transcript of the infamous Nixon-Haldeman “smoking gun” tape and made it playable as a mini-game in a web browser (start playing)!

Don’t let the initial puzzle scare you, just tap (?) for as many hints as you need. 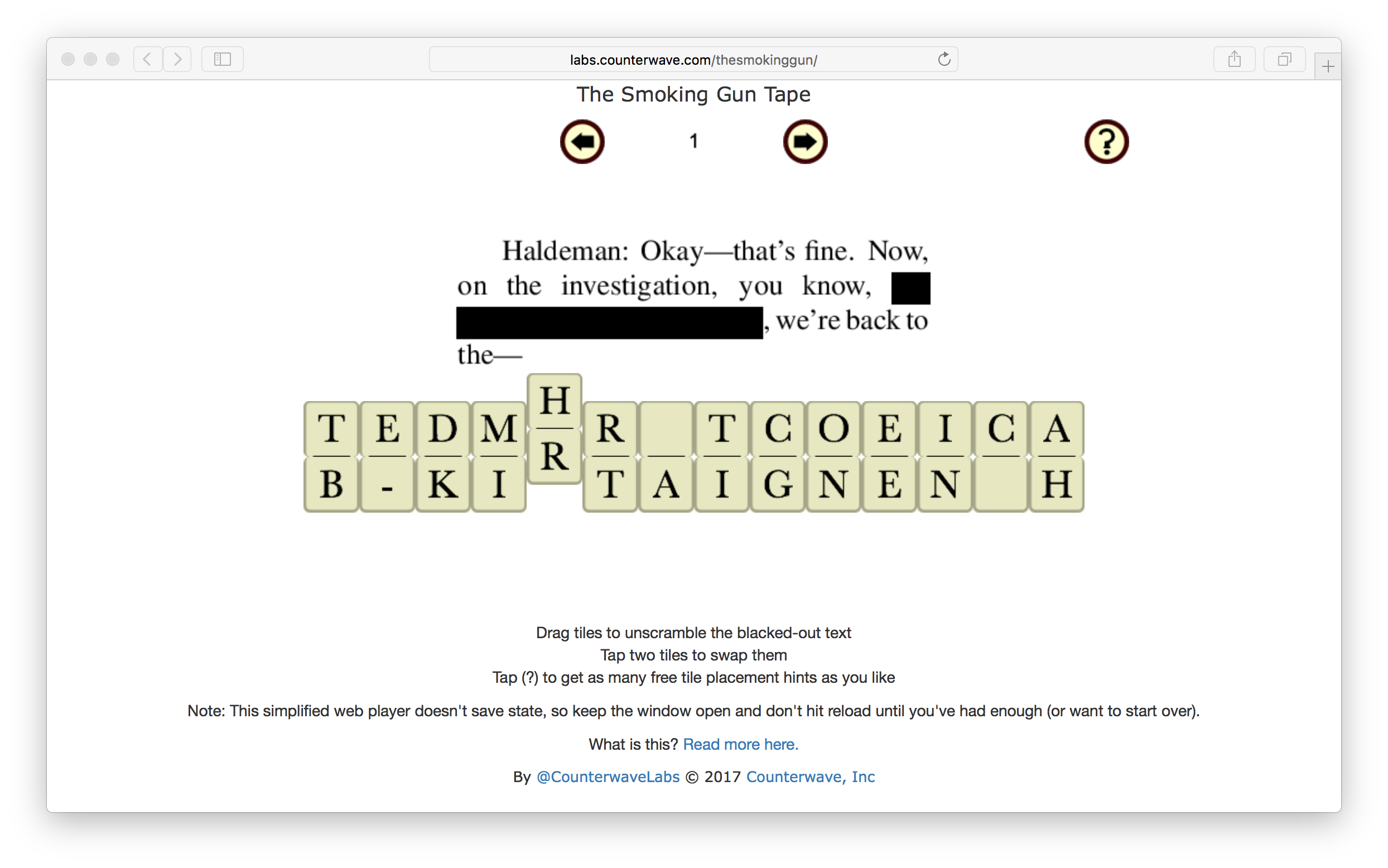 If you like these kinds of puzzles, check out our full games OKBOS and OMBY!

We had so much fun with The Colors of Moby-Dick that we decided to give the books included in OKBOS the same treatment!

Each colored square (including white) corresponds to a CSS color name mentioned in the text, in order from beginning to end. Hover over a square (or tap it on a touch device) to reveal the text mentioning the color.

Can you find the “great yellow blotches of lichen upon the grey walls” in Sherlock Holmes? How about the “White Rabbit with pink eyes” in Alice in Wonderland?

Presented in order of decreasing colorfulness: